TRELLA TO RESUME RIDES IN NOVEMBER OR DECEMBER 2015 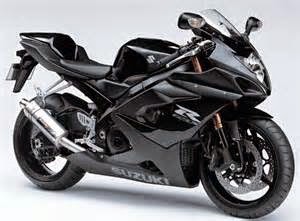 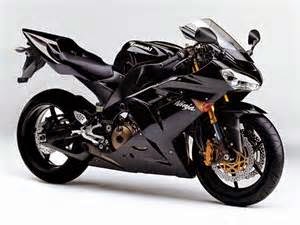 Please note that the all Trella rides, that is Wednesday evenings and Sunday monthly rides will resume either in November or December just in time for the 2015-2016 summer! They will not be organised for the Winter season and most of the Spring due to leave reasons.

Please ride safely in the meantime and do take it easy on the roads!

May you gain all positive experiences whilst riding! Please continue to email on trella_japbikes@ yahoo.com.au if need be during this time. 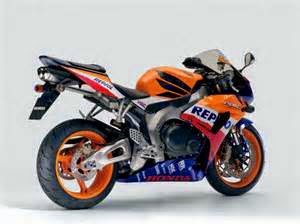 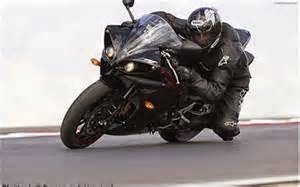 Dear Trella Sportsbike Riders from the past and the present

This notice is to inform those who would like to participate in the SECOND Sunday S-U-M-M-E-R  2014 ride southbound on SUNDAY 18 JANUARY 2015. Welcome 2015 with a great ride outside of Sydney!!

***IF ATTENDING THE TRELLA RIDE, PLEASE EMAIL trella_japbikes@yahoo.com.au OR SMS by Saturday evening 17 January 2015  your intention. This makes it easier for coordinating purposes. Thank you ***

Arrival time: any time between 9.30am-10.25am, for cafe or breakfast there and chatting

Weather: If the weather has showers predicted, please contact 0414 714 807 to ascertain the status of the ride by Saturday evening 17 January; if raining, the ride will be cancelled of course!)

If you are running late on that morning, please ring/sms.

**The Next monthly Trella Sunday ride is scheduled for early-mid February 2015. This will be published in late January.

"Trella" organised its first Sunday day ride after a pause in activity recently on Sunday 28 September 2014 and many "old" and new faces had come along at Macdonald's Belmore South from 9.30am eager to start their engine at 10.30am to enjoy the day with the destination being Gerringong via the Royal National Park (RNP), Jamberoo and Kiama. And...what a day it was!! The weather could not have been a nicer spring....start to spring! Sunshine abundant and 24-25oC!

We filled up with petrol at the 7/11 at Roselands, so we could ensure that there was no further stop for at least 150 klms. Traversing King Georges rd, Princes Highway, Tom Ugly's Bridge, we reached the Royal National Park entry at Loftus. It was a busy road inside the park and quite understandably as the fantastic weather got "every man and his dog" out and about in cars, on two wheels, on foot. Eventually, we made it to Stanwell Tops by midday where we stopped and chatted for a while. Dimitrije on his 2011 CBR1000 Repsol and Paul on his 2007 CBR1000 we waiting there to join in.

Chris had to return to attend to issues that had arisen with two other riders in the RNP as they had an unfortunate incident but both were ok at the end as we were informed. All's well, ends well!

We left Stanwell Tops, cruising the Coastal Road which had a lot of traffic. The beaches were full as if we were in summer and it was only the first month of spring! Imagine what will happen in summer, in a few weeks time!

We then headed off up Bulli Pass, to join the Freeway and go down to Albion Park round-about. Thence it was onto Illawarra Highway so we could travel on Jamberoo Rd. What a great ride that was and is!! Windy road, green pastures and many, many, many cows, chewing and loooooooking (mooooooo) at the passing bikes, that is us!

A good stretch of windy roads, up and down, on a hilly landscape. That is how this pristine area looks like and feels like riding! Brett "had a ball"!

We reached Kiama waiting for Andrew and Angeliki but they decided to use the freeway and wait for us at Gerringong, as they would find it a challenge to negotiate the Jamberoo windy roads! So, once we found out they were there, we all headed down the South Coast bends. Brett knows these bends very well once again and so does Dimitrije!

Lunch at Gerringong occurred at about 2.30pm, more like an Italian/Spanish/Greek lunch, a typical southern European one timewise, but it was enjoyed by all. The winds though picked up and we had to hold onto our chairs of the cafe, which were nearly blown away! That is the south coast for you!

We departed back to Sydney at about 4.00pm, stopping at Albion Park for a petrol fill up, reaching eventually Sydney by 6.30pm, negotiating the horrible traffic that had banked up for at least 10 kilometeres before Heathcote! An unbelievable sight!

We are all looking forward to the next Sunday ride on 19 October 2014. Keep in contact for that date's destination as the information should be up on the Web-blog by the 12 October!It is likely to be northbound to Terrigal.

Enjoy the photos from Belmore, Stanwell Tops and Gerringong! 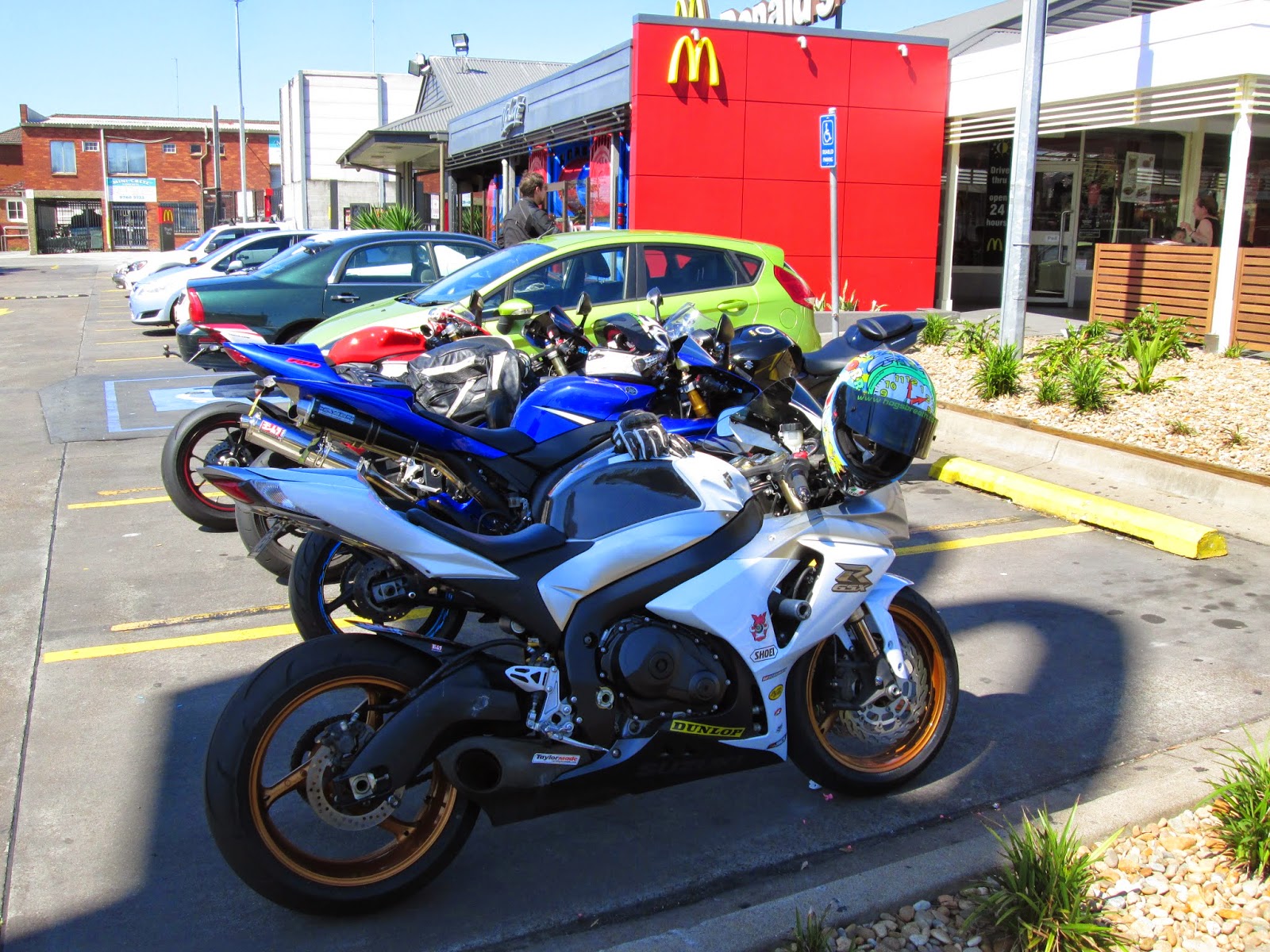 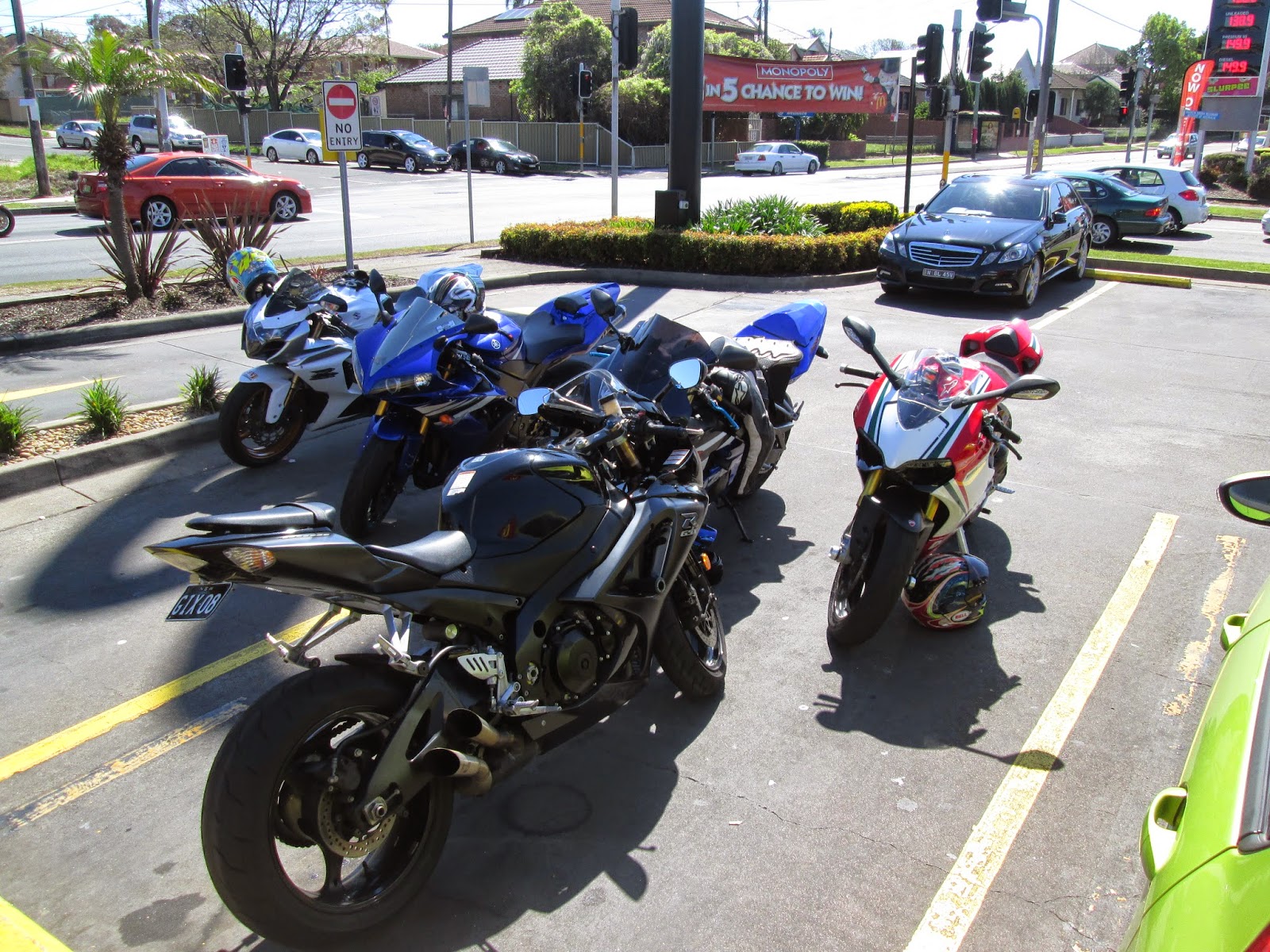 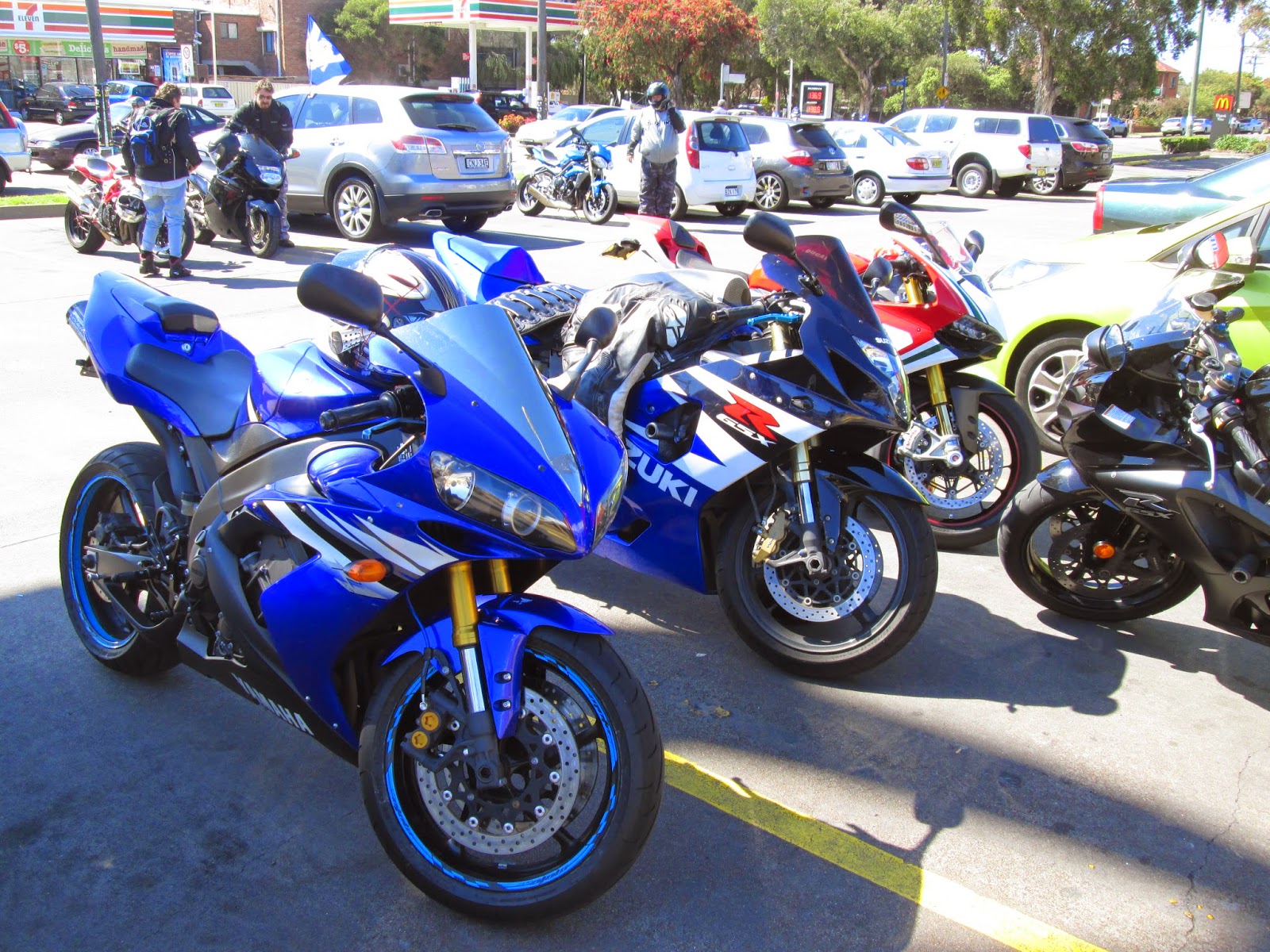 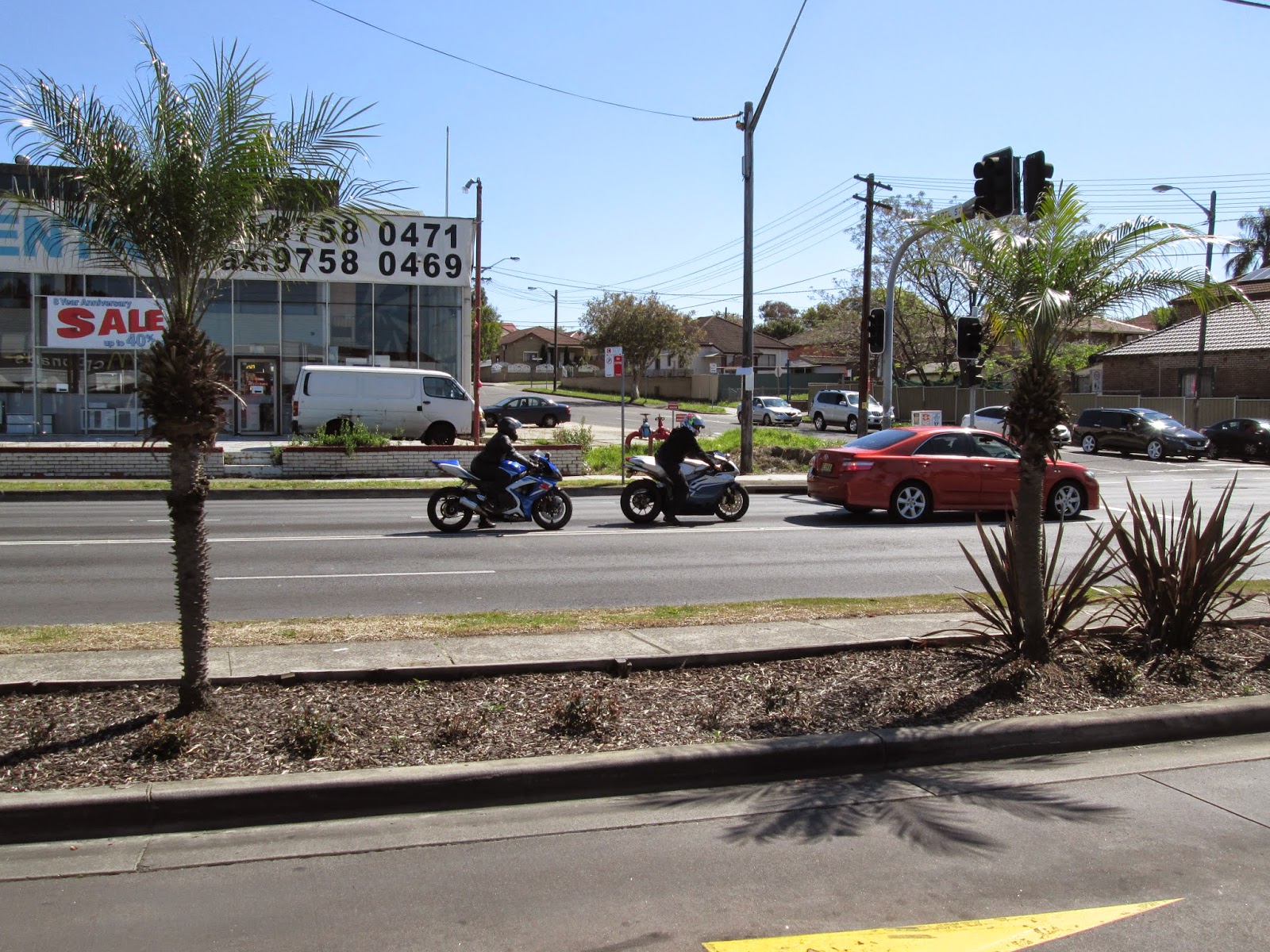 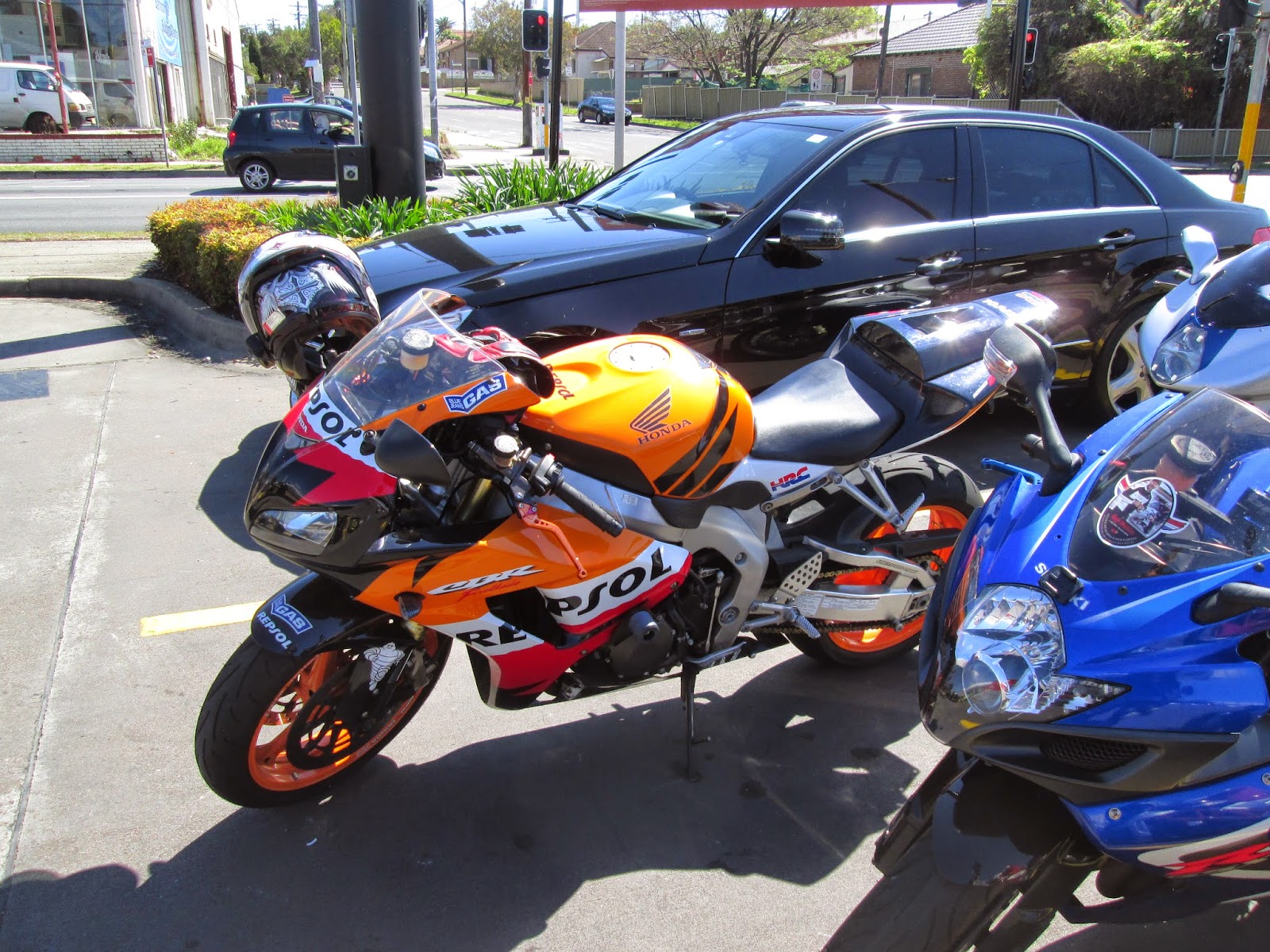 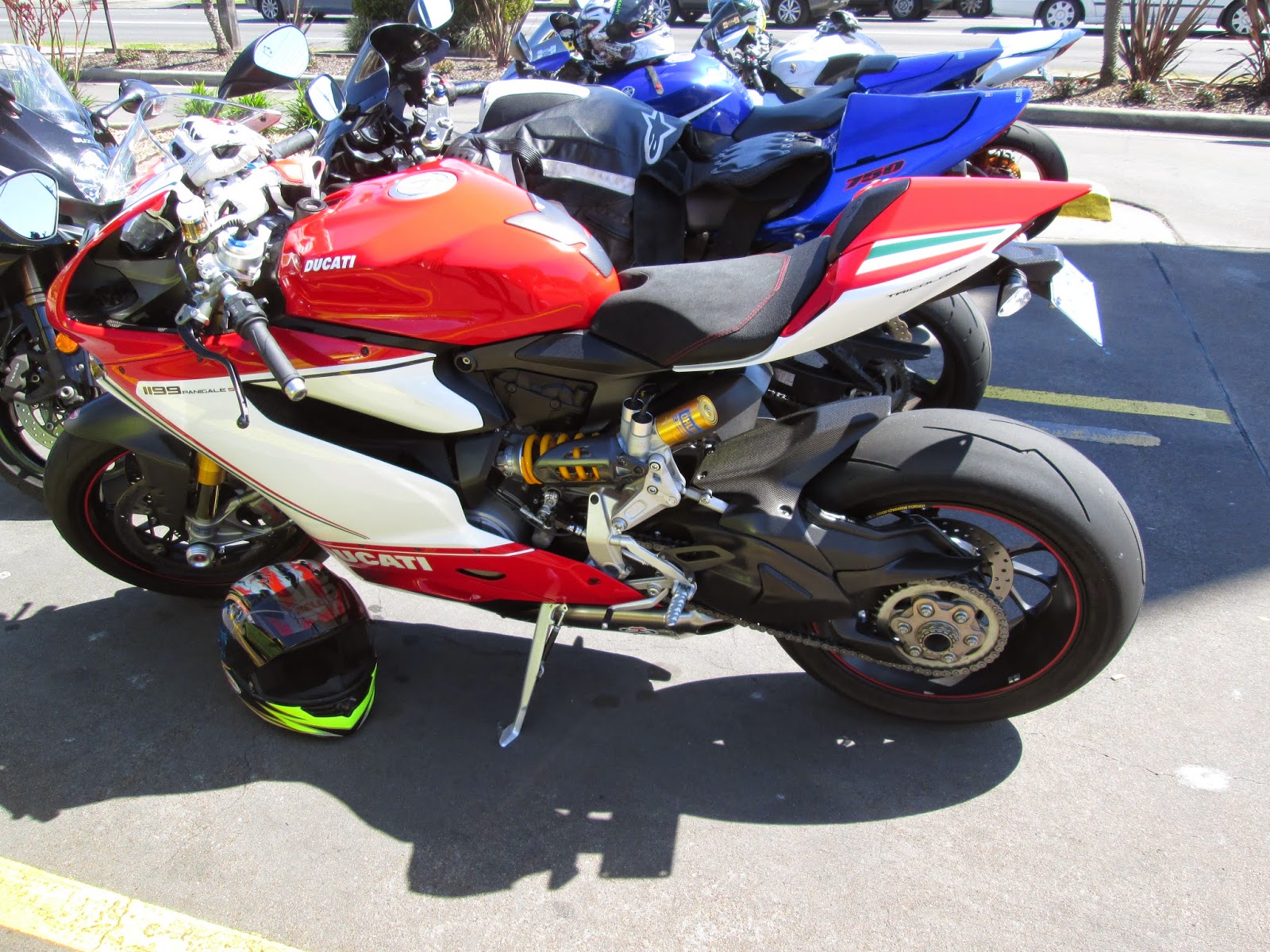 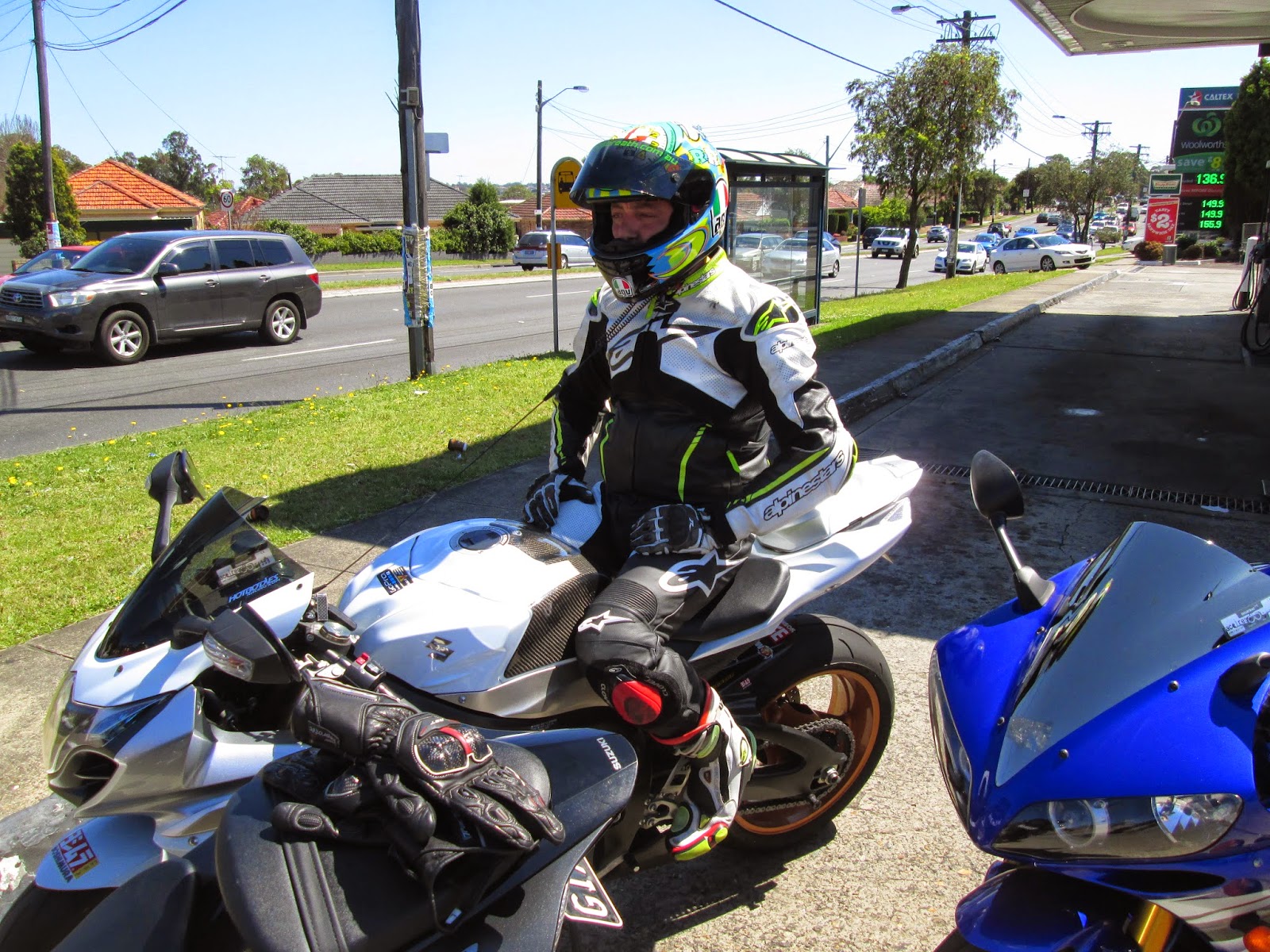 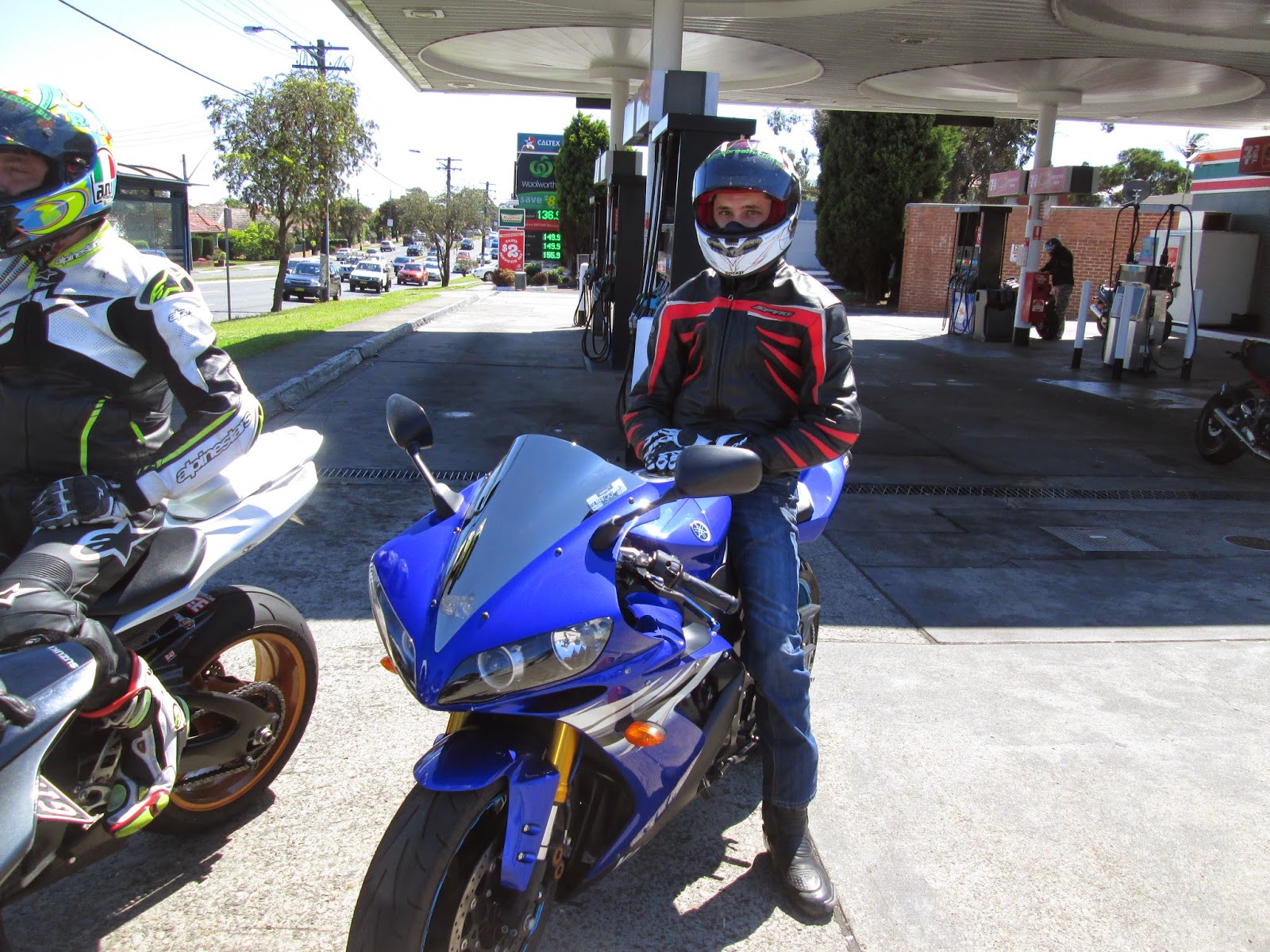 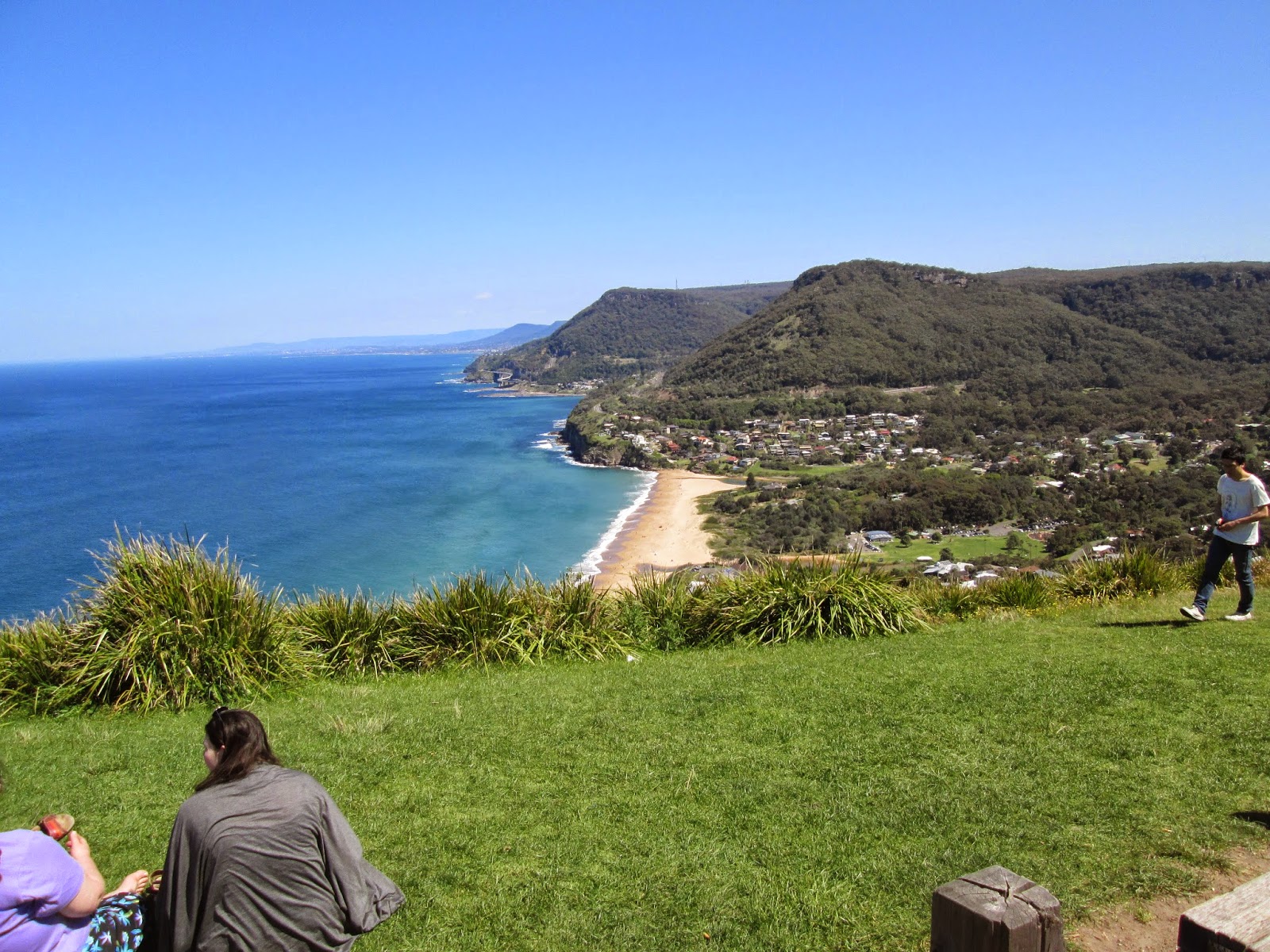 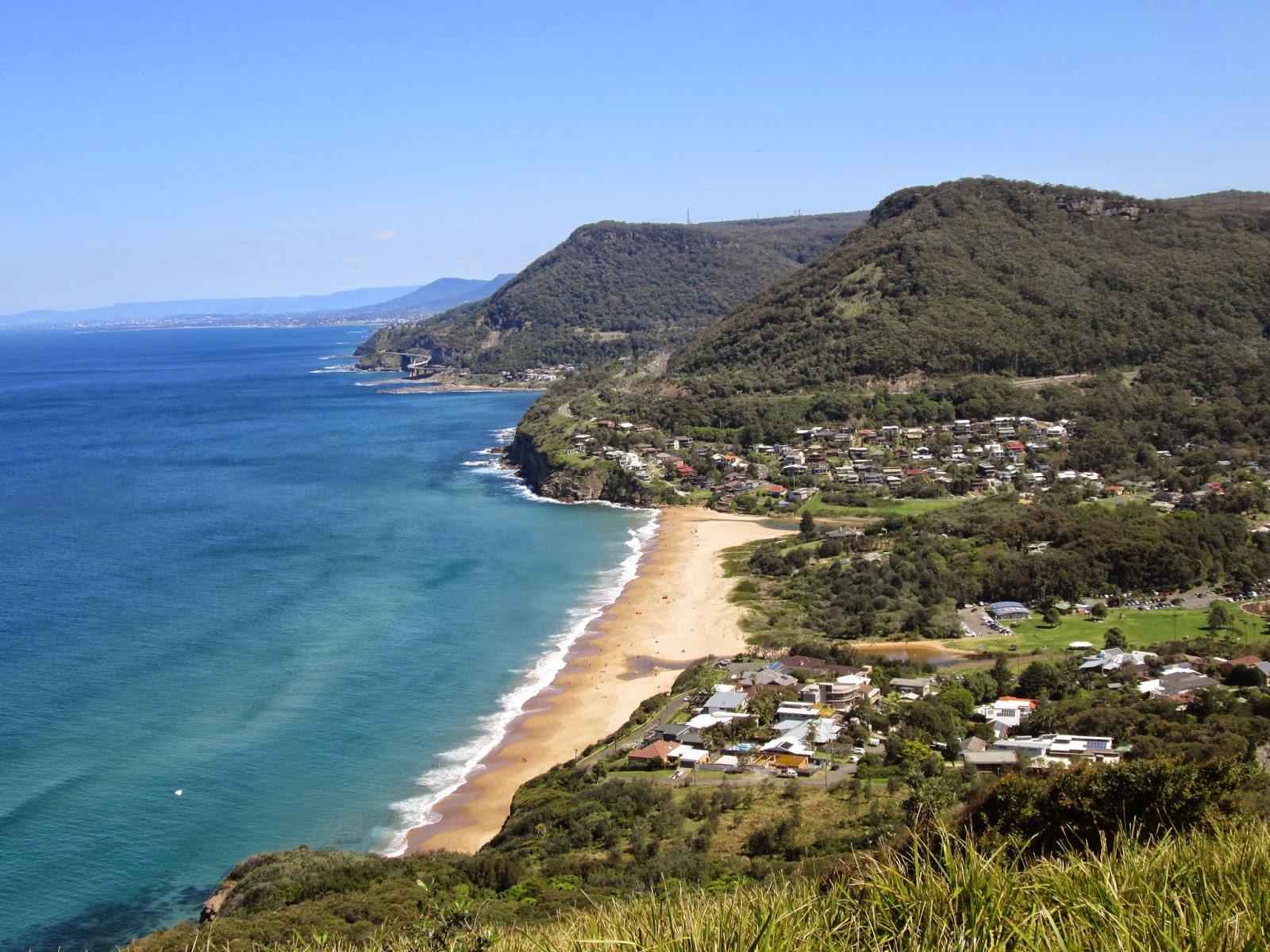 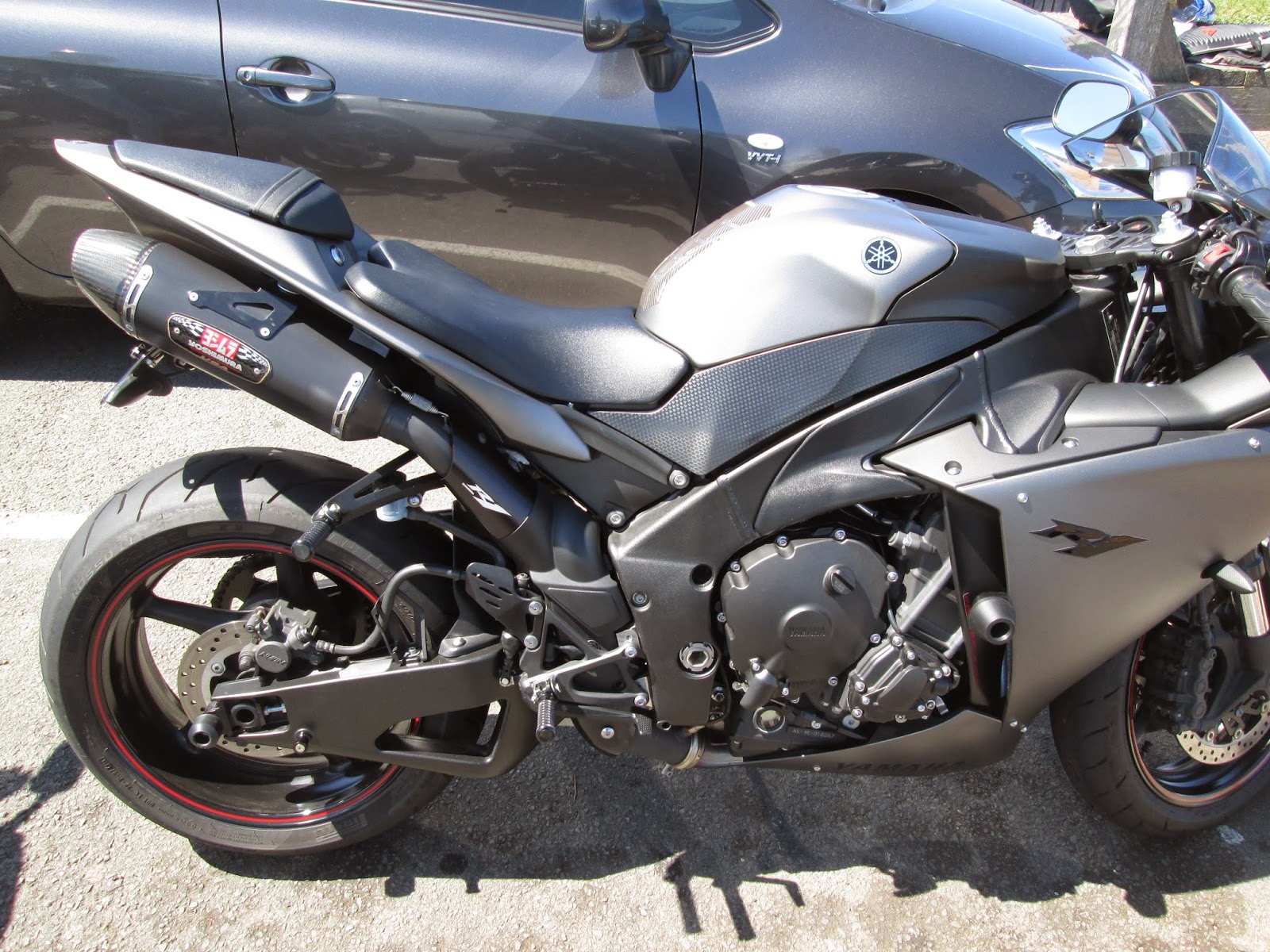 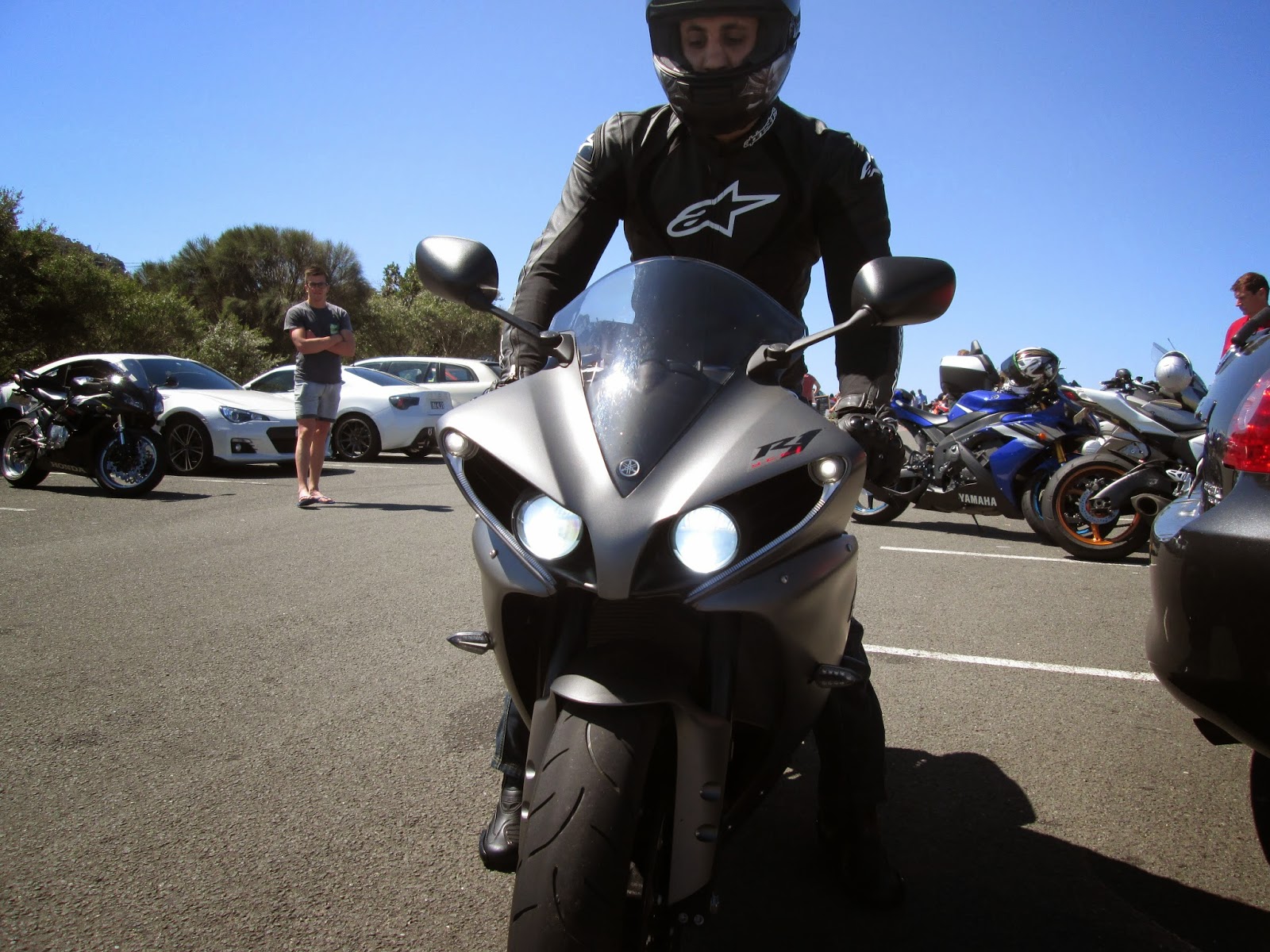 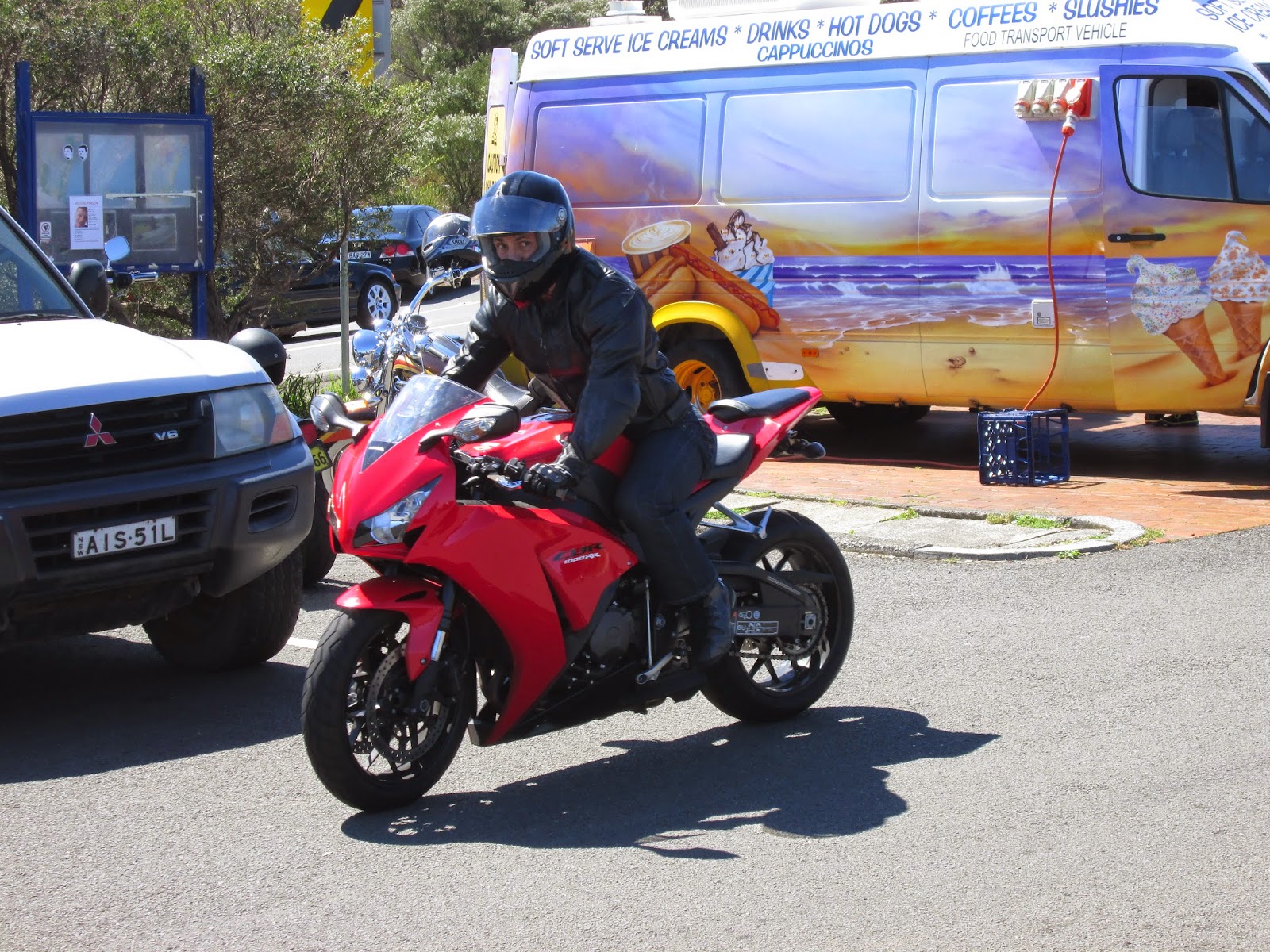 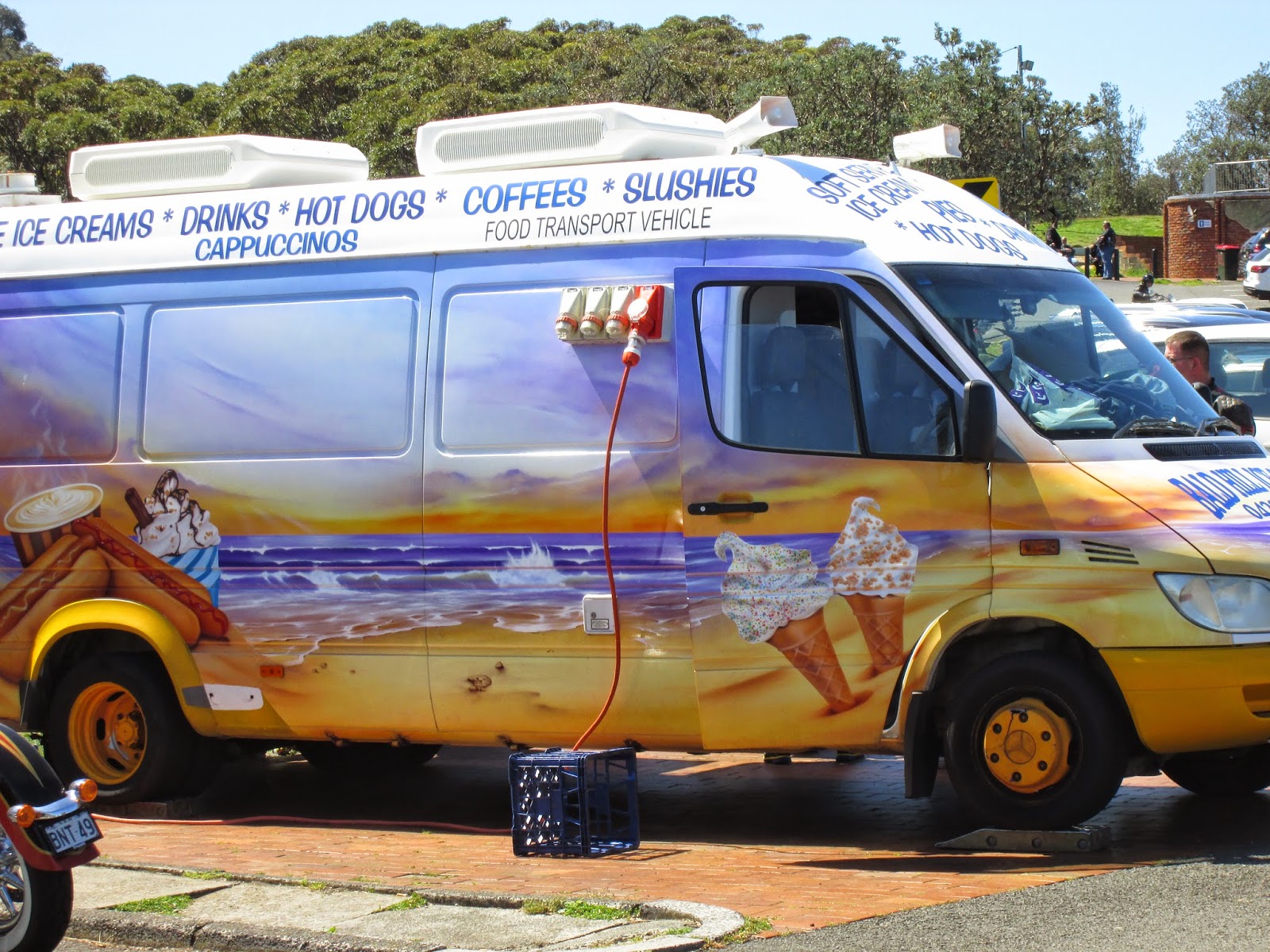 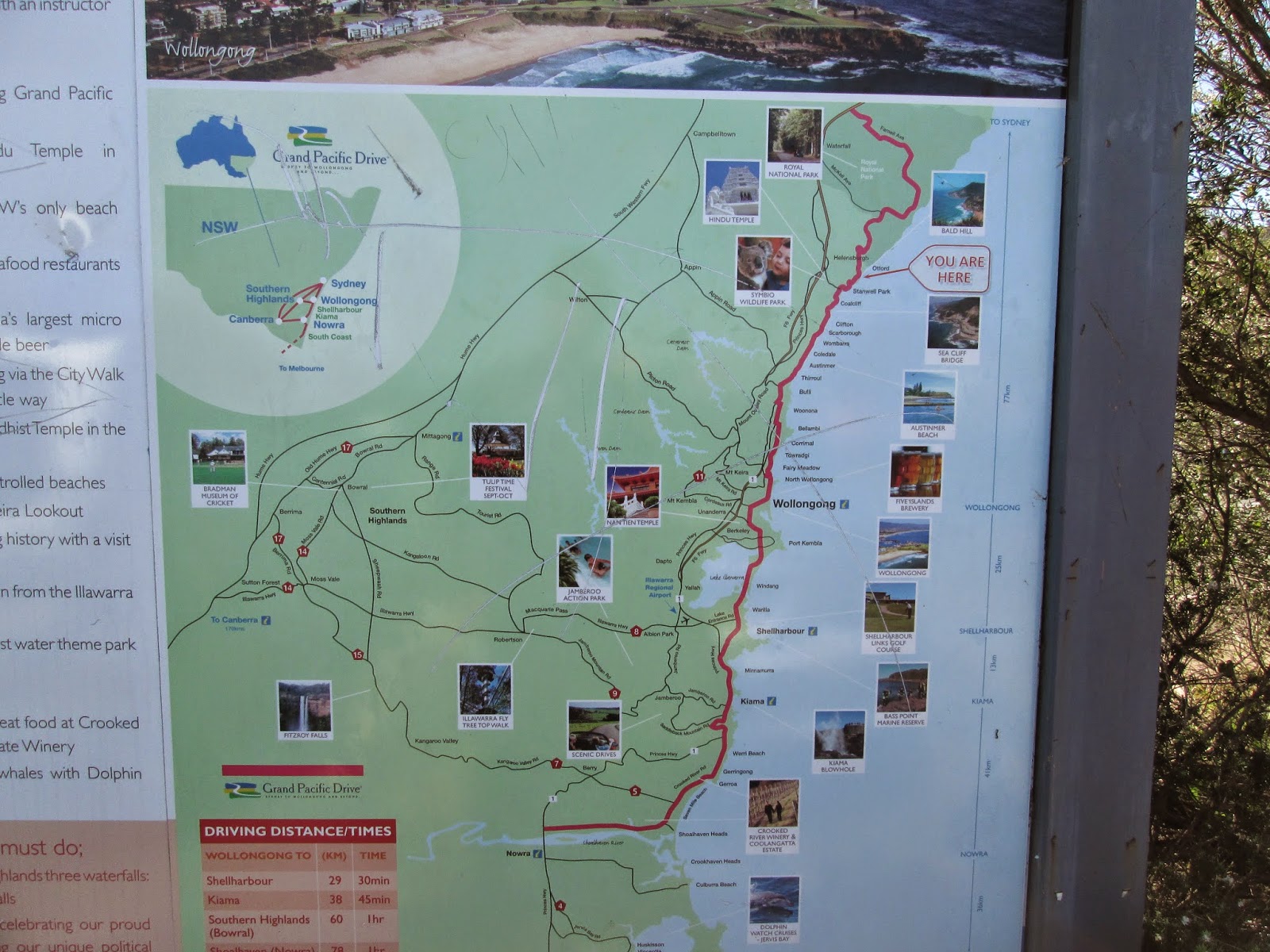 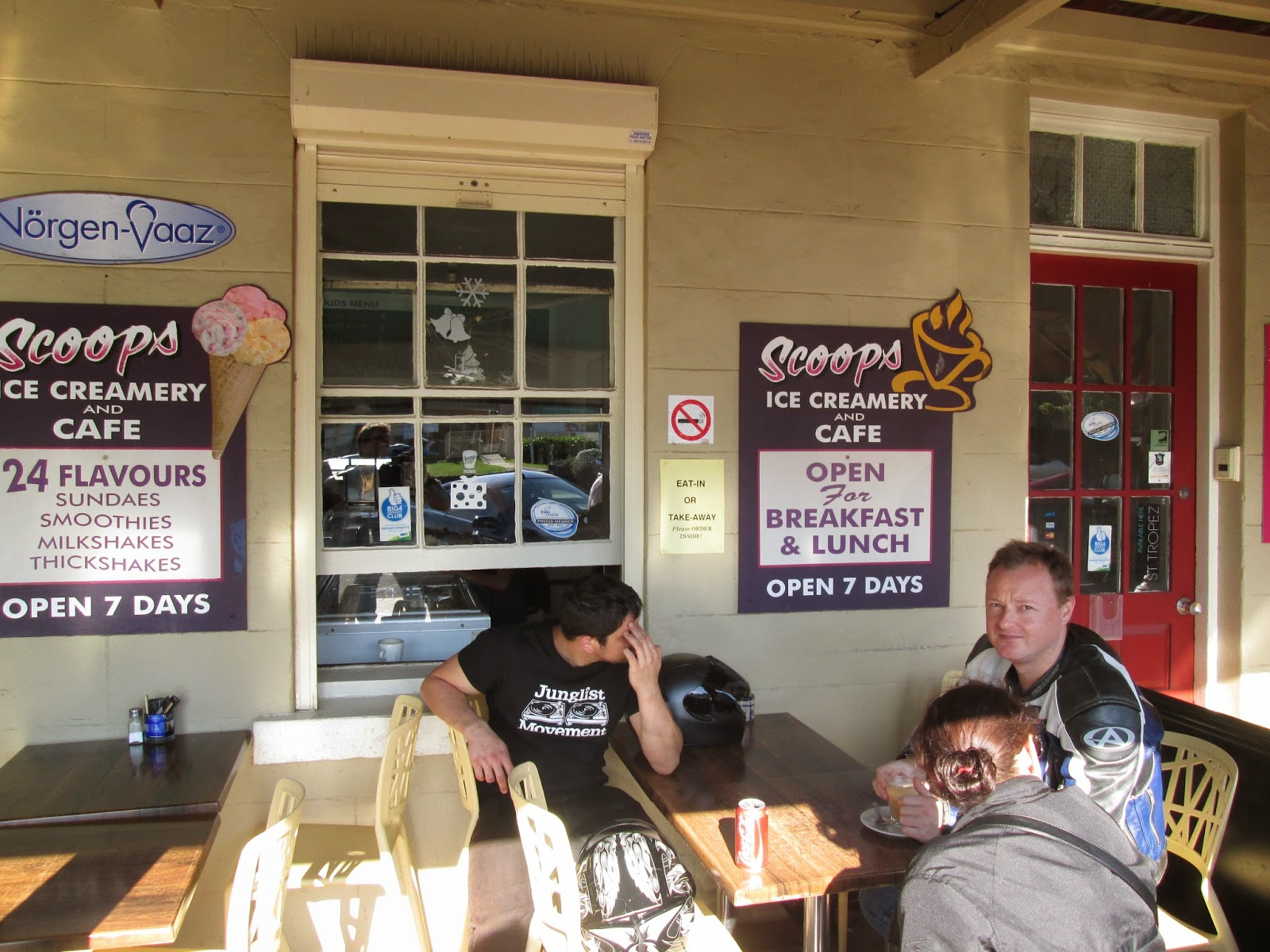 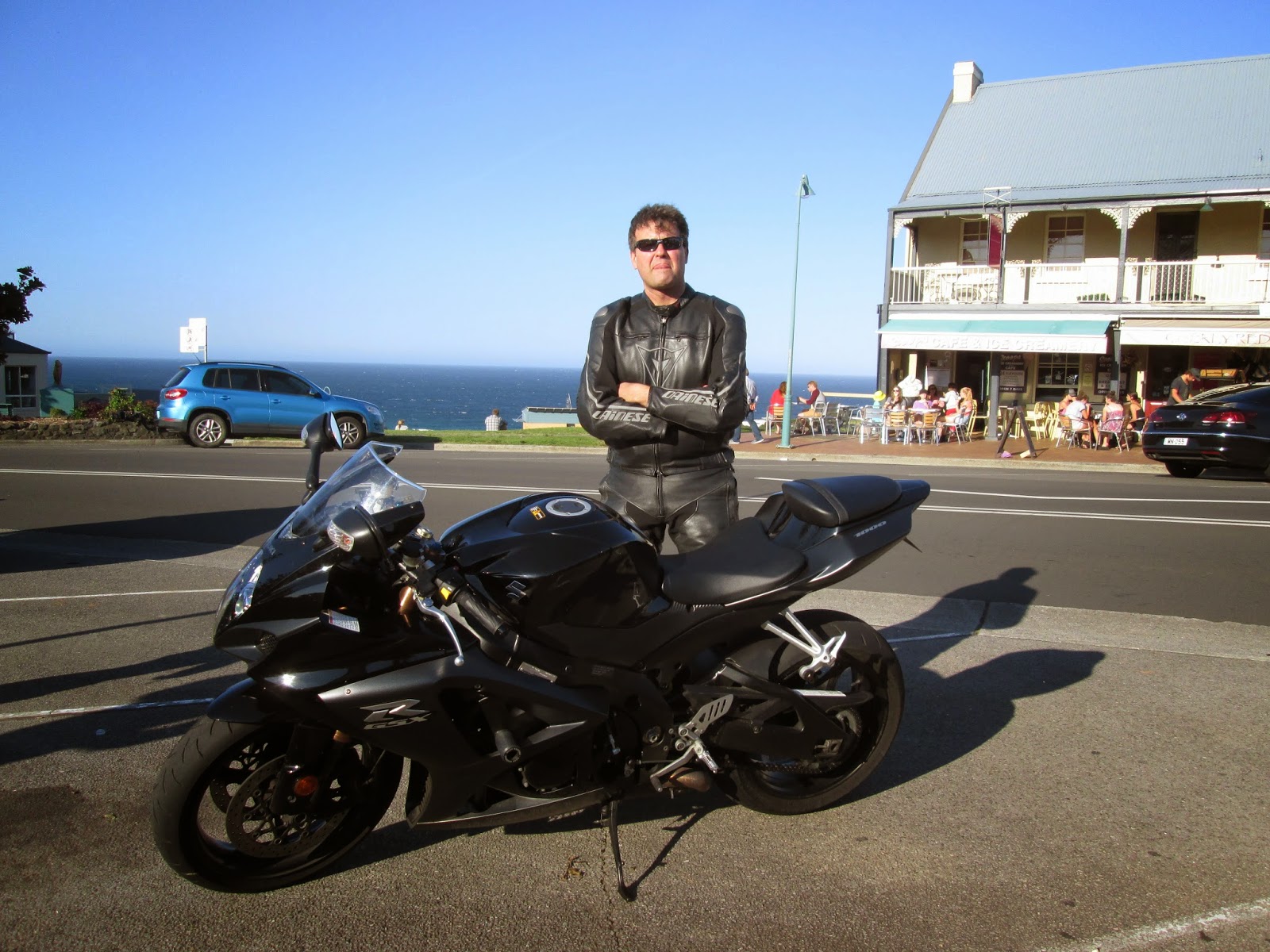 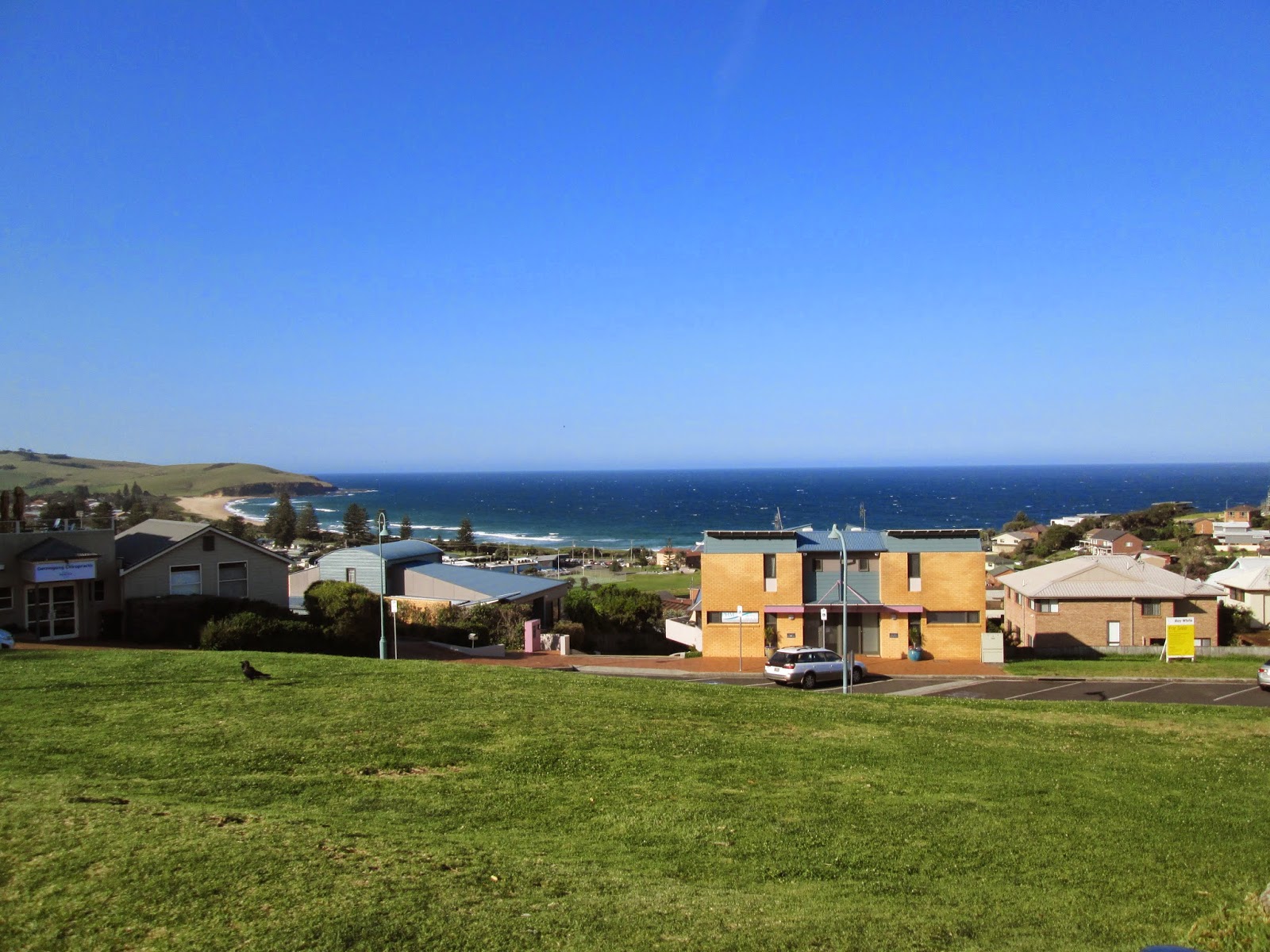 Dear Trella Sportsbike Riders from the past and the present

This notice is to inform those who would like to participate in the FIRST Sunday S-P-R-I-N-G 2014 ride to Gerringong from Belmore Macas meeting place and via Sutherland, Royal National Park, Stanwell Tops, Coastal Rd, Albion Park, Jamberoo, Kiama & South Coast bends..they are most welcomed to join in! Mark in your diary now!!!!!!!!!!

Celebrate the beginning of spring and actually spring into spring in late September!!

Arrival time: any time between 9.30am-10.25am, for cafe or breakfast there and chatting

Weather: mild, partly cloudy at this stage---hopefully! (If the weather changes to showers, please contact 0414 714 807 to ascertain the status of the ride by Saturday evening of 27 September; if raining, the ride will be cancelled of course!)

If you are running late on that morning, please ring/sms.

**Please note that the Spring 2014 "Trella" rides will be on the website soon.

**The Next monthly Trella Sunday ride is scheduled for mid October 2014 that is for Sunday 19 October.

A little bit of enjoyment....sit back and relax with Greek bike riders

If you have ever yearned to see how some crazy Greeks ride so skillfully their super sport bikes around Athens and the surrounds during the day or night, winter or summer, click onto the following Youtube videos and sit back and...enjoy! In fact some of these riders are part of the Superbike Club of Athens (www.superbikeclub.gr)  and they are friends of "Trella". They send their best regards to Sydney motorcycle riders and wish them well, as well as good and fast riding times!

http://www.youtube.com/watch?v=1hj2xnvcDLY&sns=em
Posted by Unknown at 11:05 am

YOUTUBE videos for enjoyment from the Athens Superbike Club (SBK)

With 1000s of motorcycle videos posted on YouTube from around the world that make one's evening quite entertaining, why not click onto this one below and enjoy? It was taken from the pillion view of the undersigned on Sunday 12 January 2014 from Corinth to Athens on the national highway, coming back to the Greek capital in the late afternoon. Please click on more Athens Superbike Club videos to enjoy more real footage of good riding!